Plakias is a village with beautiful beaches, which attracts more and more visitors who want to discover the other face of Crete. The path to Plakias is truly impressive, as the road passes through beautiful canyon Kourtaliotiko. At the port of Plakia can find taverns and cafes. The beach of Plakias starts from the village and extends eastward. It is one of the longest beaches in Crete, offering a sense of comfort and plenty of space. Other beautiful beaches in Plakias are Damnoni, Ammoudi, small Ammoudi, Lefkogia and Schoinaria, beach beloved by those who love diving. Diving center is also close to Plakias in hotel Calypso.

Preveli located about 35km south of Rethymno and 10km east of Plakias. The beach Prevelis also known as Lake Prevelis Phoenicia, located at the exit of the imposing Kourtaliotiko.gorge where passes the Great River. It is certainly the most famous beach in southern Crete, and receives thousands of visitors every summer. Previously, he was a favorite among hippies. On the banks of the Grand River is a large colony palms of Theophrastus, which gives the area a sense of African landscape. The river, forming a large lake 1.5km long before flowing into the sea, has water all year round. You can walk along the river, under the shade of palm trees and other trees, and begin to ascend the magnificent gorge. In large pedestal water formed every so often you can take a cool bath. The palmforest was burned down on 8/22/2010 due to heavy fire, but surprisingly returned greatly in a short time. At the exit of the river formed a sandy beach with pebble bottom and very cool water because the river. In the eastern part of the beach there is a beautiful rock reminiscent mast. Is poorly organized, without umbrellas and there a few restaurants and snack bars nearby. Also rented a pedal boat for a ride on the river. 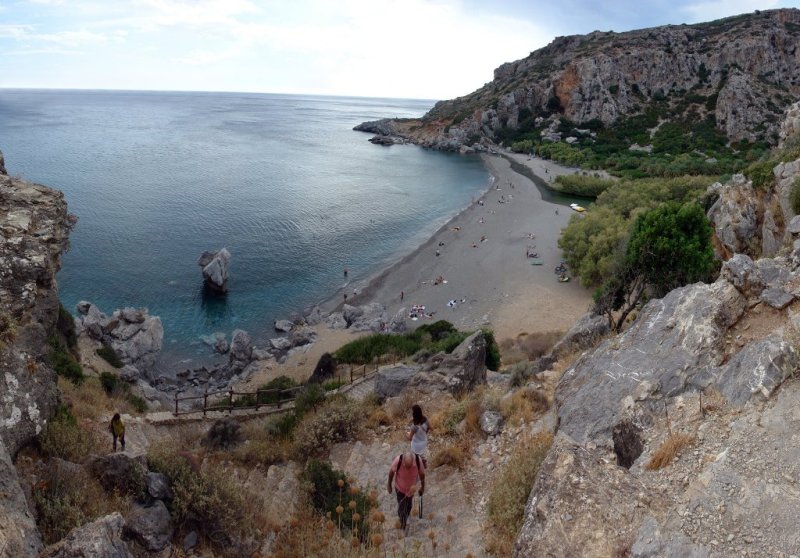