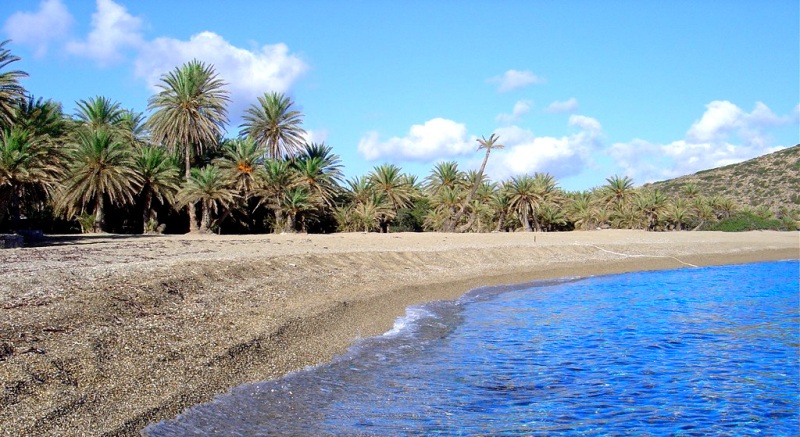 The palm tree forest of Vai is located in Crete, in Lasithi. Located at the eastern end of Crete by the sea in particular in the Cretan coast of Karpathios Sea, just north of the village Palekastro at about 20 kilometers from Siteia. It is one of the 19 Aesthetically Forests of Greece in which he joined in 1973. The reason for its inclusion in the category of protected natural areas is the existence of the endemic Cretan palm. This particular palm is known from the Minoan era and called Theofrastos palm (Phoenix theophrastii). Its area is 20 hectares and the name comes from the local dialect, in which the trees are named Valles or Vaya → Vai. It is the most extensively palm Phoenix theophrastii area in Crete, as in other areas of the island (about 10) found only small clusters or groves (Prevelis, Agios Nikitas), but there is no extensive forest. The palm forest is fenced.  In the fenced area there is a small spring which feeds a also small brook. At the eastern end, to the beach, are dunes, soil particularly favorable for the development of palm trees. The location of Vai is particularly important for Europe because of its uniqueness: nowhere else in Europe there is no known palm forest Phoenix theophrastii.

We use cookies to ensure that we give you the best experience on our website. If you continue to use Transferscrete.com we will assume that you are happy with it.Ok